Around the world in 80 days? While this mission seemed totally unrealistic in the late 19th century, to the point of being one of the extraordinary journeys in French writer Jules Verne’s book collection, these days we can accomplish that very feat in a little more than three days, including plane stopovers. We, human beings, are driven by curiosity, by the desire to explore, to achieve new things. We want to surpass limits and turn the impossible into reality.

And, just like catching a plane and flying to another continent in but a few hours, exploring and producing the pre-salt reservoirs – which are as deep as an incredible 7,000 meters – was made possible by means of a lot of scientific research and technological development.

It was in the Tupi field, which is about 300 km off the coast, that we began our story in the pre-salt, breaking paradigms and paving the way to a new exploratory frontier. Since then, we have accumulated achievements that reflect our role in this extraordinary adventure in ultra-deep waters.

These are the main ones:

1 – We produce approximately 11 barrels in the Tupi field per second
This adds up to more than 1 million barrels of oil per day (bpd) from a single field. Tupi is the asset with the highest production in deep waters in the world: It accounts for about 45% of the volume produced in the pre-salt, which is already above 2.2 million bpd.

As if that were not enough, did you know that more than 70% of all oil produced in Brazil comes from the pre-salt? Oh, and in the time that you took to read this curiosity, we produced almost 600 barrels.

In just over 11 years since the first oil, Tupi is our second largest field in accumulated production. It trails only Marlim, a post-salt field, which has been producing for over 30 years and took approximately 18 years to reach the 2 billion mark.

3 – If the Tupi field were a country, it would be ahead of a few of the traditional oil producers in a world ranking

The average production would rank the Tupi field in 21st place among the largest oil producers, ahead of countries like Oman and Venezuela. And the pre-salt would be even higher up in this ranking, coming in 11th place, above Nigeria.

And there is a simple reason for this: More than 25% of the global production in deep and ultra-deep waters comes from the pre-salt. To make these comparisons, we use data related to 2019. 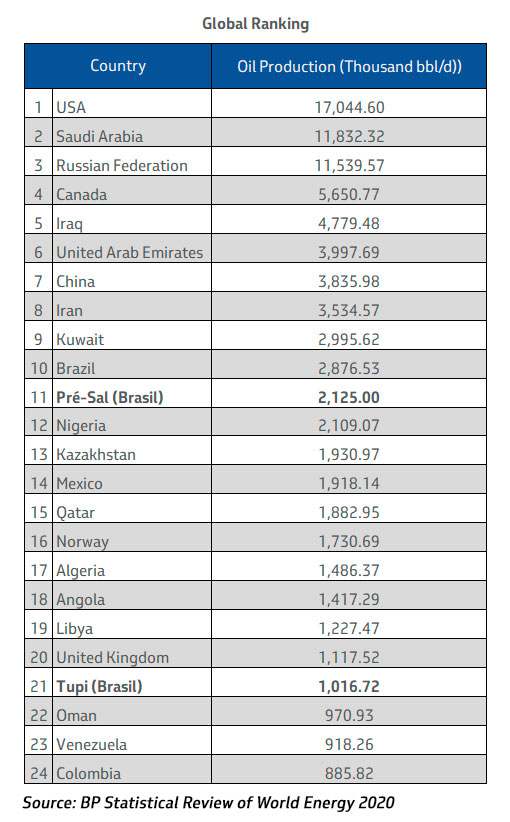 4 – To identify the previously unknown wealth that was under the seabed, we carried out the largest 3D seismic survey of the time in the Santos Basin

Over a four-year period, more than 20,000 km² were mapped, equivalent to the territory of Slovenia or twice the area of Lebanon.

5 – Intensity defines the pace of production system deployment in Tupi, averaging a unit per year

More than the platform, the most visible part of our offshore operations, installing a complete production system requires building and completing several wells, in addition to interconnecting several kilometers of underwater lines.
Below the waterline, 117 wells are installed in the Tupi field, between products and water or gas injectors, and 2,205 km of underwater lines, such as risers, flowlines, and umbilicals. All of this connected to the nine platforms that currently produce in Tupi – the first of which arrived there just four years after field discovery.

All this thanks to the evolution of knowledge in the pre-salt layer, to the application of cutting-edge technologies, in addition to the standardization of subsea equipment and flexible pipelines, among other advances.

7 – Going where no one had gone before demanded the development of innovative technologies, which earned us the top prize in the offshore oil industry

In 2015, we were granted the Distinguished Achievement Award from the Offshore Technology Conference (OTC) for the set of ten technologies applied under unique conditions in the Santos Basin pre-salt complex, an unprecedented feat in the industry. Of these, nine were used in Tupi.

And it is at this very field that we continue our development journey supported by technologies, this time with the digital twins project, which will start being used on the P-66.

Such production, with high daily volumes in the Tupi field, enabled the distribution of more than R$100 billion in royalties and special take from 2010 to 2019.

9 – Our extraordinary history in the Tupi field has but began, with only 5% of the deposit produced so far
It feels like it happened yesterday, but it has been 20 years since we acquired the BM-S-11 block, where Tupi is located, under a concession regime and in partnership with Petrogal and Shell.

And we will go much further: Considering that only 5% of the reservoir has been produced, there is still a lot of potential ahead. According to our projections, Tupi will continue to be the most productive field in Brazil in the coming years.
More than a starting point for pre-salt production, Tupi was the engine of its development and the open-air laboratory of innovations that allowed unprecedented advances in that province. Thanks to Tupi, we have reached unprecedented levels of production, set record after record, and left an unprecedented legacy for the industry.
It was because of the accumulated learning made from this asset that today we can develop other pre-salt fields such as Búzios and Mero, in a scenario that is promising and full of new opportunities.