Petrobras: We acquire Búzios and Itapu fields on the Transfer of Rights surplus bidding round

We inform that will be the operator with 90% stake in the consortium with CNODC Brasil Petróleo e Gás Ltda. (5% stake) and CNOOC Petroleum Brasil Ltda. (5% stake), which acquired today the exploration and production rights of the surplus volume of Búzios field from the Transfer of Rights Agreement.

Additionally, Petrobras acquired 100% of the exploration and production rights of Itapu field surplus volume.
With today's bidding round results, Petrobras assures the maintenance of the operation in these fields, for which it had already exercised the pre-emption right, as disclosed to the market on May 21, 2019, and reaffirms its leadership in the Brazilian pre-salt, consistent with its strategy of focusing on the exploration and production of world-class offshore assets.

Búzios field, which started its production in April 2018 and already produced around 100 million barrels of oil and gas equivalent (boe), is the largest discovered deepwater field in the world. It has light oil and proven high productivity wells.

Búzios is a world-class asset with significant reserves, low lifting cost and is economically resilient to a low oil price scenario. The acquisition of the exploration and production rights of surplus volume of Búzios is consistent with the strategic to focus on investments in which we are the natural owner.

The knowledge acquired over 10 years in the area and its great potential, combined with the conditions of the asset acquisition, with the signing bonus of R$ 68.194 billion, compatible with the value of the field and the oil profit of 23.24%, at the minimum level, increases the attractiveness of Búzios to the consortium led by Petrobras.
The average daily production of the field has reached 600,000 boed, considering the four units installed (P-74, P-75, P76 and P-77). A fifth platform, scheduled to start-up production in the second half of 2022, is already under construction. New units will be installed in the field to produce the surplus volume of the Transfer of Rights, in which the number and capacity will be established with the formalization of the co-participation agreement between the consortium participants.

For Itapu, Petrobras understands that the unit which it started the contracting process in July will be responsible for both the production of the Transfer of Rights and the surplus volumes, which made the full acquisition of the area extremely attractive economically, given the low additional investments and the conditions to purchase, corresponding to a signing bonus of R$ 1.766 billion and an oil profit at the lower level of 18.15%. 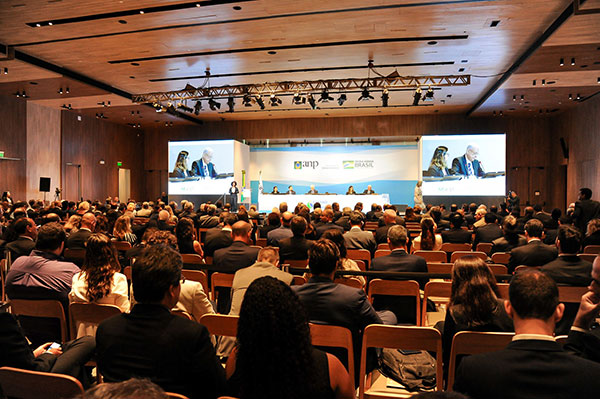 The total amount of the signing bonus of R$ 63.14 billion correspond to a participation of Petrobras in both assets, which should be paid until December 27, 2019, same date in which Petrobras will receive the compensation cash from the Amendment to Transfer of Rights Agreement, that sums  R$ 34.1 billion (reference date of September 30, 2019).

The additional need for funds does not change the level of the Petrobras in September 2019 and will be supported by current cash position and by cash generation from 4Q19.

At the same time, Petrobras will continue to pursue the deleverage target for 2020 (Net Debt/EBITDA of 1.5x), through active portfolio management, as it has done throughout this year, and will use the proceeds from the payment of the deferral from the Transfer of Rights surplus to contribute to maintaining its debt reduction path.
The participation in the Transfer of Rights surplus bidding round is aligned to the company’s long-term strategy and strengthens Petrobras' profile as the world's leading operator of ultra-deepwater giant oil fields.