Composition of Diesel Fuel Prices: Check out How It Works - Petrobras 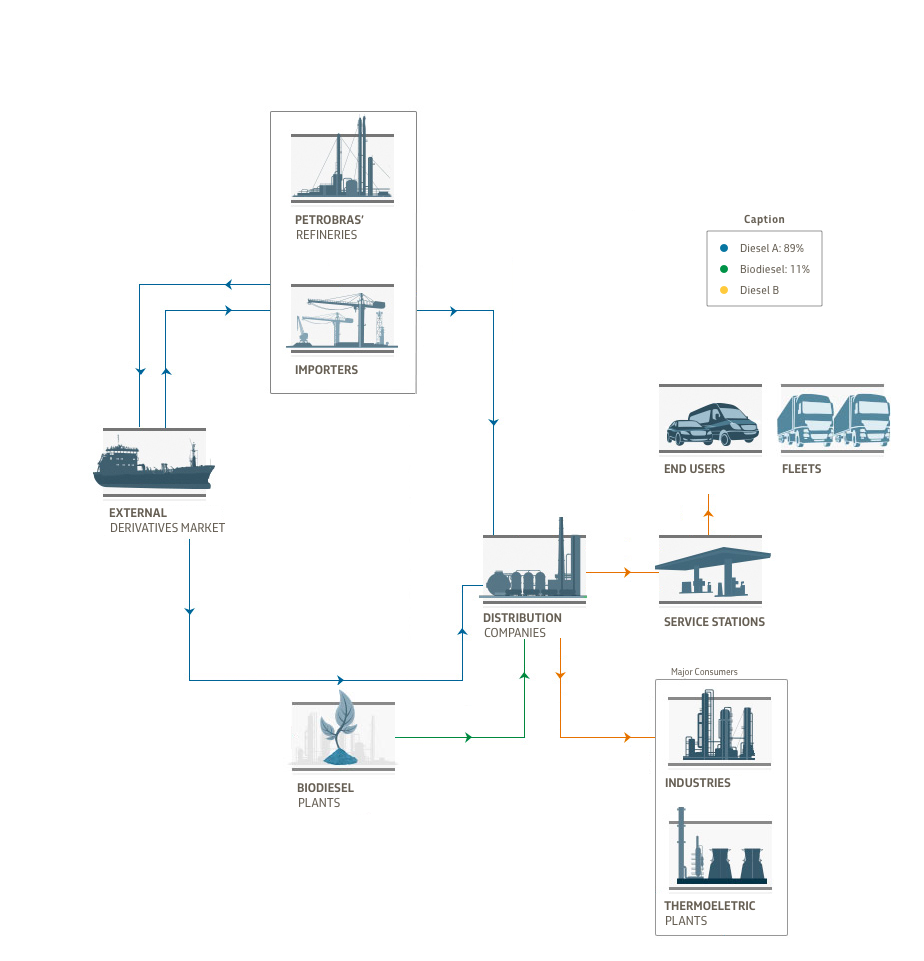 In Brazil, automotive diesel consumption is restricted primarily to the agricultural sector and road transport. These sectors are extremely important to our country's economy, thus, it is important the consumer know how this product’s market operates, from the producer to end consumer, and be aware of how its price is established.

The Brazilian diesel fuel market is currently regulated by the National Petroleum Agency (NPA) and by Federal Law 9478/97 (the Petroleum Act). Thus, since January 2002 diesel fuel imports were released and the price went on to be defined by the market itself.

The diesel fuel consumed in Brazil can be produced by Petrobras, by other refiners in Brazil, and by the private petrochemical plants; or it can be imported by companies that are authorized to do so by the NPA. Petrobras markets the diesel fuel produced by its refineries to the distributors operating in Brazil or directly to major consumers, such as thermal power plants.

Since January 2008, it has been mandatory for all automotive diesel fuel marketed in Brazil to be blended with biodiesel, a renewable fuel produced by plants (private or belonging to Petrobras) based on plant oils or animal fat. This rule was laid down by the National Energy Policy Council (CNPE), by means of resolutions. In quarterly auctions organized by the ANP, Petrobras buys from the biodiesel producing plants the volume to be resold, also in auctions, it sells to distributors, who are responsible for the blending procedure. Currently, the proportion of biodiesel represents 12% of the final volume of diesel sold at the pumps, which from then on is called B12 diesel.

The distributors, then, resell the diesel fuel already blended with biodiesel to the thousands of service stations, retailer reseller transporters (RRTs) or directly to large customers, such as cargo and passenger transport companies, industries and farms. In the trade chain, RRTs are responsible for reselling to large consumers who do not have their own structure, picking the product up at the distributors and delivering it directly to the customer.

The price that Petrobras practices to market diesel fuel to distributors can be represented by the sum of two components: the share of the amount of Petrobras' product and taxes, which are levied by states (ICMS1) and the Union (CIDE2, PIS/PASEP3 and Cofins4).

In most States, the ICMS calculation is based on an average weighted price for the final consumer (AWPFC), which is updated fortnightly. This means that the price at the retail service stations can be changed without any change having been made to the price Petrobras is responsible for.

In the price the consumer pays at the service station, in addition to taxes and Petrobras' part, also included are the cost of biodiesel and the costs and trade margins of the distributors and resellers.

By understanding that the diesel fuel pricing chain is composed of several different parts, it is easy to realize that any change made to at least one of them will reflect, upwards or downwards, in the price consumers will pay at the pump. As it turns out, Petrobras only controls a portion of the final price to the consumer, represented by the price at its refineries without taxes.

There are cases in which Petrobras does not participate in the product’s trade chain, such as for imported diesel fuel, or when it is produced by some agent other than Petrobras.

Prices practiced at the service stations all over the country are monitored by the NPA, which uses weekly surveys, the results of which can be checked at the Agency's website (www.anp.gov.br).

The ICMS includes the part referring to the Tax Substitution, which is the value Petrobras collects for the sales operations from the distributors to the retail gas stations and from the stations to the final consumer.